Gloom Factor: Clear skies and cold enough for 2 layers except for Tebow

Pre-Party: Stats.  May have been Han Solo because he didn’t tell me if anyone else joined him or not.

Thang 4
Parking lot partner work Bear Crawls aka “Awkward Bear Crawls if Partner Stops Suddenly.”  Partner 1 assumes Bear Crawl position while Partner 2 provides resistance while grabbing the shoe heels of Partner 1 while they do Bear Crawls to the 1/2 way point of the parking lot (light pole).  Partner 2 does his best to look straight down and not straight ahead because hard to have that visual so early in the morning.

Conditions: 33 with wind chill, BUT, it wasn’t wet.

DISCLAIMER & WARM-O-RAMA: ShowMe Lap, some Tebow stretches to open the hips and we were off.

PAX circle up facing each other in plank position.  One PAX backs out and slowly performs a lateral bear crawl while the other PAX holds a plank variation.  Repeat until each of the TWELVE PAX completes one revolution.

MOSEY to the storage shed

THANG 3:
All TWELVE PAX lined up for a Wall Sit on the shed.

Round 2 – Pass the cinderblock down and back with an overhead press, while holding a wall sit

Round 3 – Pass the cinderblock and bear crawl to the end of the line perpetually until all the way around the sheds. 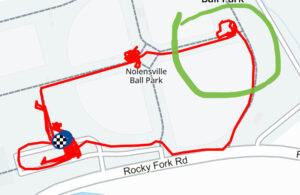 MOSEY to the steps in front of the field house.

3 Rounds each – Bear Crawl down the hill in the grass, wheel barrow up the steps.

3 Rounds each – Crawl Bear up the hill in the grass, wheel barrow down the steps.

Little extra wall work to bring us home, including a new move without a name (coming back), and that’s a wrap.

CIRCLE OF TRUST/BOM:
Per Staples, moving his Mom in to her new living space went well!  LMP’s Wife got started on her new medication.  Prayers that her body can overcome some of the side affects, still grateful for not having to start with chemo.

Our first full year is in the books and it was a success by any measure.  We’ve got a lot of wood to chop, but we’re coming in the new year with momentum.

MOLESKIN:
Little colder than expected this morning, but we still had our cold weather haters (Old Hickory / Hush Puppy) out anyway.  Way to make it happen!  I gave the redneck mix a break for some Stevie Ray Vaughn essentials, good thing Numbtucks wasn’t there, he would’ve been really bummed if #Redneck didn’t play.  POCAHONTAS was in the house, great to have him back and he rocked the very beary workout.

ANNOUNCEMENTS:
New Year Ruck tomorrow at 5am!  There will be an undisclosed number of coupons, but I promised, it wouldn’t be 1:1

Bring some water, bladder if you have one and some gloves.

FYI – This event IS attainable for every PAX who’s posted in the last month.  Don’t let distance scare you, come out and have fun.

–  Prayers for Typo and fam, Show Me getting on the road, Soccer Mom, LMP
– **CHRISTMAS PARTY THIS SATURDAY** 12/21, 6p-9p @ Staples’ barn; check slack for details and for the sign up sheet to bring sides, dessert; significant others welcome, but not kids

Conditions: Roughly equivalent to the day before the “The Day after Tomorrow”

ShowMe’s last post as a Nolensville citizen is this Saturday. Come support and somehow bring hot food! Check with Staples for details

Conditions: Not wet, No Mosquitos & No Sunburns

Warmorama/Disclaimer: Did a couple arm circles and some leg stretching…not big on warmups…

Mosey to the Bridge (or The Meat of this Q)

The Plan – Between Each 50 Steps, Execute One Bear Square Sequence

Due to the narrowness of the Bridge, The Plan Changed (“What Plan” ~Barney) – Now we’re going the length of the bridge before each Bear Square.

Mosey back to the lot for…

Climate: 40s, slight breeze, partly cloudy which made for a great sunrise

All those who struggle during the holidays (Q Included)

†  With consideration for our injured/inhibited/elderly? PAX, Q opted for a Speed Walk Mosey as the primary MoT today. However, this was scrapped after Q discovered F3 Nolensville PAX are literally terrible at speed walking.

Conditions: 42 and almost raining, not as bad as the weather app said.

Warm-Up/Disclaimer – Did the ShowMe lap, totally missed the disclaimer.

In Honor of/Preparation for fit test, we got some reps

As a trial run to improve times, we did 5 sets of 10 hand release burpees every seconds to shave some time off our opening act Saturday.

Mosey to the BC Bridge for more FitTest reps

Then Run Half Mile Loop

Then Start the Half Mile Loop in Indian Run

In the interest of time…stopped at the sheds

50 Block Merkins between partners – Rotating run to the Batting Cages

100 Block Squats between partners – Rotating run to the Batting Cages

150 Block Curls between partners – Rotating run to the Batting Cages

Finish the Half Mile Loop back to the parking lot

Conditions: The temperature was 15 degrees but the wind made it feel closer to zero. Combine that with a nice layer of ice on everything and you’ve got yourself some premium Gloom.

Warm-Up/Disclaimer – Just as we start to take off for our ShowMe lap, another vehicle pulls up. That’s right, its your boy, ShowMe showing us why we call it a ShowMe lap!

Mosey up to the sheds where we stored the cinder block coupons from the Gauntlet. Bust out 20 blockees and take a half mile lap. Repeat, decreasing 5 blockee reps each round. Equals 50 blockees and two miles.

PAX form several lines in front of the swing sets and perform a pull-up apocalypse starting with 10, OYO.

Bear Crawl the bridge and back because we love it.

Main Event…WHOOOOOOOOOOO (just for you Creeper, 😉

THANG…Que the Medic and Halloween mix!!

In between each group of exercises PAX had a mosey down & politician back//plank and wait…..

Coffeteria: Provided by Tebow…. it was a lively discussion which included, but not limited to, facts (loose facts) on theology, Presbyterian vs. Pescatarian, medical exam descriptions, song lyrics, Cassette Tape Albums, and many more wonderful, mind opening, deep conversations…

Thanks for letting me lead fellas.  Always a pleasure.

Thanks for letting me lead fellas.  Have a great day! — MICDROP