8 total PAX slowly strolled in, with one showing up after a short warmup. Some mumblechatter about the moon looking not so Blue?? Even though the moon wasn’t very impressive it gave us some light to get in a quick beating.

Started off with 10 burpees in the parking lot to get the blood flowing.

Thang:
Partner up (1 Partner stays on ground level the other runs up and down the garage)
Together complete 150 Merkins & 150 WW1s while other runs up and down.
The partner goes up the garage & first lunges across the garage & second time through broad jumps across (**some mumble about the top being longer that we remembered.) * the other partner remains working on the 150
Once exiting the garage stairs you must collect 5 burpees before taking over for your partner. Run hard back rot your partner.
Those who finished planked and flutter kicked.

Lined up shoulder to shoulder in the parking lot.
Bear crawl across all parking spaces (every other line stop and do 5 plank jacks

Mosey to Parking lot for Finish:
Finish with one min of Good Mornings!

9 PAX grunt and sweat on an adventure through history via Bill and Ted and learn to ‘Be excellent to each other.’

Long warm up lap around the Square –shake things up by going clockwise.

The Thang:
Mosey to the parking deck between Walnut and Maple.

YHC explains the basic plot to ‘Bill and Ted’s Excellent Adventure’ for the few poor souls who have never seen it. Declares exercises will loosely relate to the military historical figures they traveled through time to kidnap and pass their history test –in order to save the world through the inspirational music of the Wyld Stallyns.

Round 1: Napoleon Bonaparte
Starting on the bottom floor of the deck, keeping all things low to the ground like our French warrior-Emperor.
Elevens – Squats and Mericans, but Bear Crawls in between.
Much grunting by PAX. Bear Crawls = Waterloo

Round 2: Genghis Khan
Travel back to 1209 to rampage like the infamous Golden Hordes.
Escalator (of sorts) between each level of the parking deck, sprinting in between each one.
PAX were instructed to yell out random exercises. YHC picked the loudest one, and all sprinted to the next level:

Round 3: Joan of Arc
At the top, on your 6 for a full view of the sky. Go back to 1429 to share Joan’s divine vision to lead the French army to victory over the English.
MARY/Ring of Fire/choose your own ab exercise
PAX were encouraged to ‘Be excellent to each other’ in their choice of ab smokers:

COT and Prayer for all to be excellent to each other by remembering history, and through the Spirit doing the Greatest Commandment and the second one just like it.

6 PAX came out to get some grunts in under the largest moon in the history of the entire universe (apparently 3% larger than a normal moon).  It was inspiring.

Mosey to the parking lot for partner sprint suicides:

CCR tagged in for the last 15 minutes to bring us one home.

Mosey over to the covered picnic tables for some D’Mish Lateral Movement Sevens (TM).  Burpees on one end, walking lateral squat to next stop before completing jump squats.  Legs were a burning.

Announcements: Check Slack for 3rd F signups by month.  I believe we are signed up through May now.  Excellent work.  First Friday lunch at the Cookery this Friday at 11:30.  CCR committed.  T-Cell can’t be there 🙁

Great to lead and workout with the men of Titan today.  It’s such a fun site that offers a lot of different opportunities.  In honor of the Blue Blood Moon, I leave you with “Blue As Your Blood,” off of the Walkmen’s phenomenal 2010 album Lisbon: https://www.youtube.com/watch?v=8mwhr2O7aYg.  Enjoy!

I’m blanking on two others. Q fail — rake me over the coals for it.

28 degrees greeted the highly appropriate 20 PAX who were so excited for an #RF20 themed Q.

YHC makes no secret of the fact that he’s an ardent fan of Roger Federer. Each time the Swiss Maestro has won a grand slam, YHC has led a Federer themed workout, and today was no exception. This past Sunday, Federer won his record extending 20th grand slam and 6th Australian Open title. 20 and 6 would be our main numbers for the day.

Moseyed from the church up the left side of the main Ag Center loop to the top for WOR.

There are 9 speed bumps on the upper loop. PAX would do 20 reps of each BLIMP exercise at the 1st, 3rd, 5th, 7th and 9th speed bumps, and a 6th set of BLIMPS back at the start of the loop in front of the house. When all was said and done, a total of 120 reps of each.

Alternate between 20 WW1s and 20 Mountain Climbers until the 6 is in.

As Blue Mule would say: Simple, but effective.

Head back down to the playground for 20 rows and 20 hanging knees to chest. Since Fed went back to back at the Australian Open, it was a given we would do 2 sets of each exercise.

Mosey back to the parking lot for Mary.

Great work today. Iron sharpens iron, so the group pushes all of us to get better. Or as Nike would say, Betterer. 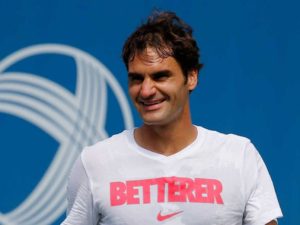 Keep El Maestro and his family in your prayers. His wife is battling the flu, they have a newborn, and he may have had another seizure last week.

Tough Mudder coming up in the fall. Contact Donuts ‘n Mish for details. If you act quickly, it’s only $400 right now.

34 and perfect for the 21 RedPillers in the Gloom this am.  Mosey start down Hogan, right on Trousdale and up the bus loop to upper parking lot. Hey, @unt Bea, welcome to the PAX. Keep this route in mind as we will be cruising it again this am. Circle up for WOR and Diaclaimer, Hey Frogger, welcome, guessing traffic was intense.
WOR-
SSH x 13
Squats x 13
GMA x 13
Can Openers Rt x 10
Can Openers Lt x 10
Sgl leg swings Rt x 10
Sgl leg swings Lt x 10
Alabama Prom Dates x 10 IC
THANG:
Quick reading of the obit of SSG Daniel Hansen while holding forward leaning rest.
Quick rundown on today’s HERO WOD HANSEN
5 Rounds for Time
30 KB swings
30 Burpees
30 BBSU
Modifications:
Partner up for accountability
Burpees split btwn PAX but coupon must be part of the burpee movement
BBSU w coupon
Run loop between rounds
2 MOM:
Reading from Heb 12 on discipline
Time
NMM:
Always good to have a partner. In the reading of Hansen’s obit it was cool to see that Daniel’s twin brother Matthew joined the Marines with him. How great is it to have a brother in arms, even better to have a Band of Brothers. Being the odd man out this am it was much more difficult to get through the discipline of the Hansen WOD. While we aren’t literally laying our lives down for our brothers, we are out early every morning to be there for them. Thank ya’ll for continuing to show up and help me get better.
Bullhorn:
Service opportunities coming up, check in w me, CCR Floppy or Dupree.
F3 Dads camp late summer, more details to follow.
YHC,
BV
PAX:
Yard Sale, Calf Killer, Due Process, Swamp Fox, CAPSLOCK, Brown Nose, Umbrella, @unt Bea, CCR, Floppy Disk, D’Mish O Nuts, Braveheart, Venus, Frogger, Dine N Dash, 3rd Degree, PSL, Vegemite, Offshore, Accounts Receivable, skid Mark, Lewd Wig, Bagger Vance

6 PAX posted for an education on some important historical people.

The Thang: Mosey to the long side of the parking lot, introduced PAX to Wilt Chamberlain. In honor of his 100 point game, PAX completed the following:

Mosey’d a bit to shake everything loose and then circled up to introduce PAX to Bruce Lee, and his workout.

Full Bruce Lee is 6 sets, but we only had time for 3 sets.

Moved on to Johnny Cash, and his Ring of Fire:

PAX circles up and gets into plank position. Gave 3 pax a choice of their favorite ab exercises. The results were shoulder touches, bicycles, WW1 situps. All Pax held plank, while pax one at a time completed all three exercises x10 reps, and then resuming plank while the pax to the left goes, until the circle is complete. It just keeps on burning.

Mosey back to start.

NM: Always a pleasure to lead you guys. I will echo BigBang from today and say how awesome it is to see a lot of you newer guys embrace all 3 Fs. Iron sharpens iron! Great work today

8 PAX were in for a merkin fest on this relatively warm morning. The day started with mumblechatter about beards (always a worthwhile topic) since T-cell and Hambone both spontaneously shaved theirs. At the stroke of 0530 we were off for a long mosey around the south lawn to the east side of the Parthenon.

Mosey to outdoor ampitheater along West End for round 2. I think Blood Clot calls theses Oop D’oops. Dips, irkins & dirkins. Round 1, 1 rep of each. Rnd 2, 2 reps…Rnd 11, 11 reps. Got pretty brutal around round 4. Took a mosey break after Rnd 8 (it didnt really help) and came back to finish. 198 total reps.

Mosey towards Parthenon then AYG up Parman Pl Hill.

Bullhorn: Shout out to Blue Mule for taking 1st place in his weight class at his most recent weightlifting competition. Shake that mans hand the next time you see him. Impressive, brother!

The Thang:
Partner up for 4 groups of 2
Field of Dreams 4 Bases=4 corners of the square side walk
Home Plate-15 Burpees
1st Base-Push Ups
2nd Base- Squats
3rd Base Lt. Dans
Batter starts at Home knocks 15 Burpees out the park and goes to first to relieve 1B. 1B then goes to 2nd and so forth until all pax have completed burpees and pick up the rest of Pax.

Eight (really! 8 at The Skunk) redwoods came to get stronger and avoid running.  Here’s how it went down:

Grabs YHC’s weight collection plus Life Champ’s kettlebell and mosey to the baseball field for the following:

30 sec AMRAP of each exercise: elevated APD, superman merkins, goblet squats, dips, burpees, kb swings.  Rest 30 sec between each exercise then decrease by 5 secs each round till there is no time to rest and you immediately switch exercises.  That’s seven rounds for those keeping track.

Mosey back to the parking lot for Mary= Jane Fonda center, back and front on each leg.  You just have to experience it, but the groans and people not completing all the reps was evidence enough that we need to do it again.

NMM:  Apparently Kathy discovered some all you can eat pasta situation with Negronis and all the risotto balls you can handle.  While that may sound interesting to some, the PAX can assure you that there are ramifications.  Venus actually tried to keep up with the flatulence but couldn’t handle the pace.

This may be Toga’s last F3 visit for awhile as the knee surgery is imminent.  You guys will be missed, but YHC plans to be back out in the summer and running faster than ever.  YHC has never been accused of being fast, so the bar is purposely being set low.