21 unsuspecting PAX got the privilege of YHC’s short shorts and Sharknado BV style.

Back to main lot for

NMM:
5 FNGs on the last day of the month? Dang right, hit our quota already.
T Claps to 🕺🏿&🐮🧍🏻on the EH. Hope that yall come back next week.

BH:
Prayers up for sure for CCR, Char and the Fogarty family. Please consider supporting them by purchasing a Char t shirt at charliesfightclub at gmail dot com. They are taking pre-orders now.

Mass chaos broke out this AM as the parking situation was all FUBAR and the PAX were forces to adapt and overcome. YHC was the loudest of those griping and complaining as usual. Early mosey sent us towards front of park only to double back for Pop, Rev & Preacherman.

Mosey past Sand Volleyball Courts where YHC shuddered remembering Sandman & his EH’s near death experience several years back. The rope defining SVC tripped the FNG (Sandman) & he laid there for what must have been 20 minutes as YHC shook my head ashamed of that EH. I digress.

Over to Parthenon for Bear Crawl Burpeepallooza

All -In, head out east side of Parthenon towards St Thomas then head south towards West End & Lord Kensington. Successfully navigate traffic and arrive at LK. YHC regaled the PAX w tales of the 21 Burpee salute from summers past. We knocked out 21 reverse burpees at the bottom and made our way back to StartEx in Indian Run fashion.

Circle up in West Parking lot area for

9 PAX including 2 Willy Lomans showed up to celebrate the life of Kobe Bean Bryant, employee #8, AKA Black Mamba, and the 9 total passengers aboard this weekend’s helicopter flight

Conditions: Per Pumpkin, a degree outside of IC credit

Following welcomes and introductions to our WLs, a disclaimer, and assurances to Rock Drop that III Pillars was in fact not a running AO, we mosey’d over to the base of Mt. Covenant to set up WOR shop, in preparation for a workout that could be mistaken as a running AO workout.

Head over to Mt. Covenant where YHC tees up that we will be honoring the legacy of Kobe by tapping into our Mamba Mentality (per Kobe: “The mindset isn’t about seeking a result – it’s more about the process of getting to that result.  It’s about the journey and the approach.  It’s a way of life…And you have to work hard in the dark to shine in the light.”).  With that, we recognize his 20 seasons, two jersey numbers (8 & 24), 5 rings and commence with the following:

All in, head back to shovel flag and time called upon arrival.  COT / BOM, with T&Ps for healings amongst the PAX, CCR and his family, TK adoption process this Friday, and Pumpkin and Crablegs for their Ms and upcoming 2.0 arrivals.

Excellent effort by the PAX – Mamba leading to 3.05 miles traversed with 51 stories climbed.   As previously coined by PA, those Driveway to Heaven suicides are brutal, especially when Bernied.   Great having Burrito & Rock Drop join representing Chattanooga and Lexington, SC.

Always appreciative of the opportunity to lead.  YHC will leave you with a quote Louisville basketball coach Chris Mack told his team when breaking the Kobe news:

Gloom Factor: Clear skies and cold enough for 2 layers except for Tebow

Pre-Party: Stats.  May have been Han Solo because he didn’t tell me if anyone else joined him or not.

Thang 4
Parking lot partner work Bear Crawls aka “Awkward Bear Crawls if Partner Stops Suddenly.”  Partner 1 assumes Bear Crawl position while Partner 2 provides resistance while grabbing the shoe heels of Partner 1 while they do Bear Crawls to the 1/2 way point of the parking lot (light pole).  Partner 2 does his best to look straight down and not straight ahead because hard to have that visual so early in the morning.

22 tackled the Dirty McDeuce this morning, and it went something like this:

Circle back up for some Mary then Bagger took us out in the COT.  Be in the present moment!

Today’s workout was inspired by the chaotic ups and downs of our recent weather patterns. PAX experienced lots of elevation change during some gloomy low 20’s temps.

Disclaimer:
Started off on great footing (literally and figuratively) with some sage advice “modify at your own risk!” This foreshadowed 3 minutes into the mosey when YHC modified the paved track in favor of a shortcut through the grass–only to end up leading a few men into several inches of wet muck.

WARMUP:
Mosey through the park, up the grand staircase, and to the parking garage for some warm up exercises, including Good Mornings, Willie Mays Hayes, Toe Touches/Stretch and Hop Kicks (in remembrance of CCR who was home with a sick child).

Start at level 1 (1 burpee), then up to level 2 (2 burpees), down to bottom, then repeat all the way to the top (up and down) stopping at each level for said amount of burpees, to level 6.

THANG 2: (Four Corners at the Top)

We worked our way down six levels of the garage, stopping at each end to perform 5 slow and low merkins. Alternated methods of movement from one end to the other, including sprints, back-pedals, bear crawl, lunge, Lieutenant Dans, and side-shuffles. At the bottom, mosey back to the grand staircase by the park. 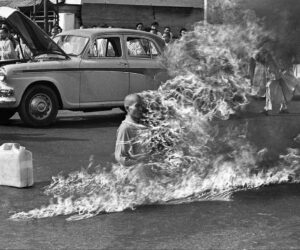 We kicked it off with a few drinks and brief introductions, then opened up with a toast before sitting down for some appetizers. We then went around the room to make introductions and tell how we each received our names. Scott wowed us all with his gift of custom-made poker chips with his TSL class logo and motto (The Black Jacks) represented.

Steaks were then presented in exemplary fashion, and another toast was given by Pop-a-Lock to recognize Hambone for his work as Comz director. The evening was so much more than we could have anticipated. The meal was exquisite, but it paled in comparison to the camaraderie and fellowship felt by all.

Thanks to all of you for making this happen! 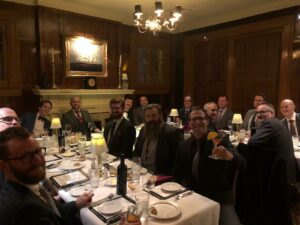 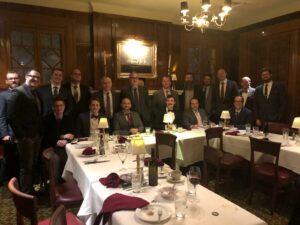 25 High Impact Men got after it this morning and participated in a celebratory birthday workout for one of the greatest guitarists in rock music history.

Weather: The perfect amount of gloom. If Goldilocks had a favorite type of gloom, it would be this one.

YHC took another Mosey toward the entrance to McCabe for THE THANG:

THE THANG:
YHC waxed poetic and informed the PAX that today, January 17, is the 72nd birthday of Mick Taylor. Who is that, you ask? He is only the former lead guitarist of the Rolling Stones, known for being their guitarist during their Golden Era. In addition, one Slash (of Guns ’N’ Roses fame) has stated that his guitar style has been most influenced by Mick Taylor. At this point, YHC switched the playlist to “Gimme Shelter” by the Stones (nice catch by Blue Mule and Vector). Gimme Shelter from what, you ask? From the B.O.M.B.S., as listed below:

We counted off 1s and 2s, where 1s performed the first move and 2s ran to the traffic circle, circled around it, and Bernied up the entrance (so they could see the cars entering McCabe and not get run over – Safety First, men!), then flapjack until completion.

Upon YHC’s completion, PAX were already in plank form (well done, gents) and YHC then called out Al Gores until the 6 wrapped up their exercise.

YHC then led the PAX to STARTEX for MARY:

BULLHORN:
What an awesome turnout in literally freezing weather! I am yet again humbled by the fact that so many men opted to show up for a workout led by YHC.

MOLESKINE:
-Prayers for the recoveries of Bad Boy, Hipster, and Siri – get well soon, gents! We miss you!
-BOLO for Side Straddle Hops, led by the Brothers Sottek in early February. See Slack for the deets.